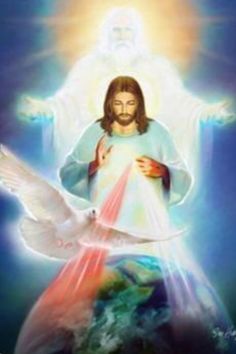 The understanding of the Holy Trinity is not a product of mathematical calculation nor logical reasoning. Instead, it is a mystery which surpasses mere human understanding and which we can accept through our faith in God.  David submits to his limitations about the knowledge of God when he says that he would not concern himself with things too great nor marvels beyond him (Psalm 131:1). St. Paul adds that no one comprehends God except the Spirit of God (1 Cor. 2:11).

There are many analogies which many people use to demonstrate the belief that there are three persons in one God. However, these do not give us even a near perfect understanding of the Holy Trinity. We shall leverage the pointers in the Bible.

The Holy Trinity Identified in the Old Testament

Genesis 1:1. “In the beginning, God created the heavens and the earth.”

Firstly, we need to understand that the word “beginning” as used here points to God. Revelation (21:6) says: “God is the Alpha and Omega, the Beginning and the End.”

From the original Hebrew text, the name “God” which translates as “Elohim”  is the plural noun of “Eloah.” God (Elohim), in the sense of the passage above, indicates the fullness of Godhead, that is, the Father, the Son, and the Holy Spirit. The participation of the community of persons will become more evident in the following passage.

Genesis 1:26a. “Then God said,  Let US make mankind in OUR image, and in OUR likeness.”

Genesis 11:7. “Come, let us go down and confuse their language, so they will not understand each other.”

Here we see action by the community of persons in the Holy Trinity during the time the people of Shinar were building the tower of Babel. God the Father was again referring to God the Son, and God the Holy Spirit.

Genesis 18: 1-2. “The LORD appeared to Abraham by the oaks of Mamre, as he sat at the entrance of his tent in the heat of the day. He looked up and saw THREE MEN standing near him. When he saw them, he ran from the tent entrance to meet them and bowed down to the ground. He said, my LORD if I find favor with you, do not pass by your servant.”

Here we learn that the LORD appeared to Abraham and he looked up and saw THREE MEN. Furthermore, when greeting the supposed THREE MEN, he said, my LORD not my LORDS.

Deuteronomy 6:4. “Hear, O Israel, The Lord our God is ONE Lord.” In Hebrew, the revealed name of God is Yahweh (I AM). The name is so holy that people are not allowed to mention it anyhow (in vain, Exo.20:7). The word “Lord” is thus used in place of “Yahweh” in most passages in the Old Testament including the one above.

With regards to the Holy Trinity, the passage above mentions that the “Lord our God is ONE Lord.” In Hebrew as in English, “ONE” could refer to number (yachid), or unity (echad).

In the passage above, the description is about unity (echad). The same usage is what we see in Genesis (2:24) “ Therefore a man leaves his father and his mother and clings to his wife, and they become ONE (echad) flesh.

Isaiah 6:8a. “And I heard the voice of the LORD saying, “Whom shall I send, and who will go for US?”

In the vision of Isaiah, God the Father spoke about a mission which He shares with the Son and the Holy Spirit. That explains the US in the passage.

The Holy Trinity Identified in the New Testament

The New Testament gives us a more vivid presentation of the reality of the Holy Trinity. Though many people accept that God the Father is God, some people doubt the divinity of the Son and the Holy Spirit. The Creeds we recite in the Church (Apostles and Nicene) are responses to the reality and faith in the three Persons in one God.

”And the Word became flesh and lived among us, and we have seen his glory, the glory of a father’s only son full of grace and truth.”

Here, John gives a proof that shows that Jesus Christ is God.

Matthew 3:16-17. “And when Jesus had been baptized, just as he came up from the water, suddenly the heavens were opened to him, and he saw the Spirit of God descending like a dove and alighting on him. And a voice from heaven said, “This is my Son, the Beloved, with whom I am well pleased.”

John 14:9b-10a,16. Whoever has seen me has seen the Father. How can you say, ‘Show us the Father’? Do you not believe that I am in the Father and the Father is in me. And I will ask the Father, and he will give you another Advocate,(the Holy Spirit) to be with you forever.

Our Lord here demonstrates the unity and equality he shares with the Father and the Holy Spirit whom he identifies as another advocate after him. The reality of the Holy Trinity is evident here.

This short Pauline greeting is a concise expression of the equality of the Trinity of persons in one God.

Our takeaways from the doctrine of the Holy Trinity includes the following:

As we celebrate the feast of the Holy Trinity, let us pray for unity and mutuality in our relationships despite our individualities. Let us also learn how to co-exist and assist each other to succeed in our various preoccupations. Have an awesome Trinity Sunday and a beauty-full week ahead. May the Grace of the Holy Trinity; Father, Son, and the Holy Spirit abide with you now and forever. Amen.