PRAYING IN THE HUMBLE WAY HOMILY FOR THE 30TH SUNDAY IN ORDINARY TIME OF THE YEAR (c). Rev. Fr. Boniface Nkem Anusiem PhD 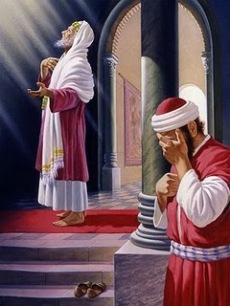 A young mother concluded with the preparation of a very delicious dish of fried rice with chicken. The aroma that originated from the dish was so inspiring and tempting to any sense of smell that encountered it. Her little son Felix witnessed the preparation of the meal as he entered the kitchen several times to ask his mother one baseless question or the other in a bid to check if the cooking was done. However, the mother had given him and his younger sister some other food and had also told them that the rice dish was meant for dinner and that would be the only time it would be served.

After cooking, the mother of Felix went to have her shower and later decided to have a nap while awaiting her husband to come back from work. Felix couldn’t understand why his mother would not let him have a little portion of the mouth-watering dish before dinner; he wished he could taste a little, much as he had perceived a dozen doses of the aroma. On her part, Felix’s mother felt obligated to stand by her instruction for the children not to eat in-between meals. The mother almost falling into a deep sleep when she felt someone touching her hand; it was Felix! As she opened her dreamy eyes to see who it was, Felix said: “mummy your face looks like you want to eat fried rice!” Felix’s mother could not hold her laughter. She knew that Felix wanted to ask to be given some fried rice but he could not get down asking for it. He wanted it but at the same time he was not ready to ask for it with humility; he rather put the need on his mother.

Humility is a very rare virtue. This is largely because it is contrary to our natural aptitudes as it involves being self-effacing. From its Latin root humus (earth or soil) it means being down-to-earth, deflating oneself. It resonates with synonyms like meekness, submission, modesty, lack of vanity, self-abasement, diffidence, etc. For Maimonides, it is the middle way or the golden mean. If humility is needful in our interactions and relationships with our fellow human beings, it is really more needful in our communication with God in the context of prayers.

Last Sunday we examined persistence or if you like “stubbornness” in prayers. Today we are faced with humility in prayer or more appropriately praying in the humble way. It is important to note that prayer without humility is not prayer at all. On the strength of this assertion, the First Reading (Sirach 35:12-14; 16-18) tells us among other things that the prayer of the humble pierces the clouds. Put in another way, a prayer said in humility is powerful and effective.

The drama of humility in prayer was aptly presented by our Lord Jesus Christ in the Gospel Reading (Luke 18:9-14) with an appropriate parable which involved two men who went to pray in the temple; a Pharisee and a Tax Collector. Before the parable proper our Lord Jesus Christ wanted to demonstrate to the people three important vices: (a) Trusting in oneself (b) Self-righteousness (c) Despising of others. All these can be summed up as emanating from lack of humility that is pride! Evidently, the worst form of pride is the one displayed before God as the word of God reminds us in the book of Psalms (5:5) that the arrogant cannot stand before God. The book of Proverbs (16:5) says that God detests the proud of heart whom He will punish and the same book of Proverbs (6:16) names it among the six things God hates. The letter of St. James (4:6) says that God resists the proud but gives grace to the humble.

Back to the narrative, two men were mentioned; a Pharisee and a Tax collector. It will be good to point out that they were two extreme personalities. The Pharisee by vocation was an acclaimed righteous and religious man who considered himself better than others; in fact, separated from others. He was seen always praying at the designated times and places with his robe of distinction worn at all times to set him apart from others. He saw himself as an accomplished good man, unlike the rest sinful humanity. On the other hand, the tax collector considered himself unrighteous, unspiritual and unacceptable to God; in fact, he was known and called a public sinner at the time.

It could have been a great sight to see the reaction of the Pharisee when he saw the tax collector entering the temple. In fact, it could have been that when he saw the tax collector he moved away from him and went further closer to the front. This was a body language that: “said we are not of the same stock I should be ahead of you in this ground. I am closer to God but you are far from him, I trust in my righteousness and I give myself 100% while you get nothing!”

Hence moving towards the foreground of the temple the Pharisee began what I may call oracle of self-praise because it was actually not a prayer. In his seeming supplication, he began by thanking God not for of His might and power but for the fact that he is not like the rest of men (sinners) and especially like the tax collector behind him. He went ahead to give God unnecessary information about his prayer life, tithes and offerings as if God was not aware of them all.

The tax collector, on the other hand, could not come any closer to the foreground. In fact, he understood the body language of the Pharisee and that could have stimulated his meek and humble disposition. He saw the gap between him and the Pharisee. He saw himself as a spiritual and moral misfit. In the face of all these “disadvantages” and being unable to even raise his eyes he made a brief effectual supplication and confession: “God, be merciful to me, a sinner!” This simple statement of seven words formed the turning point of his life as we are told that he went home touched and renewed by God. Our Lord Jesus Christ ended by saying that whoever exalts himself will be humbled but whoever humbles himself will be exalted.

Looking at the narrative very well we discover that there were not only two personalities but also two attitudes to prayer: the proud way and the humble way. The Pharisee through his prayer thought of himself as spiritually okay and needless of anything from God. He came filled and left empty. The tax collector came with a needful and meek heart; he saw himself as empty and needful of God and he went home filled and satisfied; in short, if that was an examination, the Pharisee failed woefully while the tax collector passed with distinction.

In our day and age, we have more “Pharisees” than in the time of Jesus Christ. In fact, the Pharisee syndrome is more pervasive with the daily multiplication of Churches and creeds, most people put others who are not members of their faith or creed in God’s reject list. Contrary to the admonition of the First Reading, they take the place of God in dispensing judgment as to those who are sinners and candidates for hellfire; in fact I have heard some people reporting that some known people who are dead are in hellfire and I wonder when God gave “journalists” access to that facility. God does not need anyone as a co-judge. Moreover, all of us are on pilgrimage much as we are on earth it is only at the end that we can like St. Paul in the Second Reading (2 Timothy 4: 6-8; 16-18) anticipate the crown of glory.

Humility in prayer is a very important part of our reflection today. Most of us desperately lack humility when it comes to prayers and this can be noticed easily in our churches. A careful survey has shown that most people find it extremely hard to follow some of the needful prayer gestures in the church; for instance, kneeling down during consecration at mass. Some people would not kneel not because of any health-related issue but for the fact that they would not like their clothes to rumple or get dirty.

Some people would not do the sign of the cross when they are in public because it will make them seem to lose their imagined social status. That is why I respect some footballers who sign themselves with the cross at various victorious moments. Most of us are proud to hold onto our phones, ipads, notebooks, tabs, comic magazines and otherworldly articles but lack the humility to hold onto our bibles and rosaries and other spiritual items. It is easier for most people to confess love to their fellow human beings with mind-blowing meekness than to kneel before God with humility and do the same. It takes humility to know God and to worship Him in spirit and in truth (John 4:24).

Humility in prayers shows our dependence on God as we are nothing without Him (Phil. 4:13). It shows our love, faith, and trust in God. It is not late for us to change the way we pray and adopt a humble way. Unlike Felix in our story and the Pharisee in the Gospel Reading, let us humbly focus more on our needfulness than on the inefficiencies of other people.

Have a blissful Sunday and a blessed week ahead.

3 Comments on “PRAYING IN THE HUMBLE WAY HOMILY FOR THE 30TH SUNDAY IN ORDINARY TIME OF THE YEAR (c). Rev. Fr. Boniface Nkem Anusiem PhD”