BEYOND OUR DOUBTS: HIS MERCY IS FROM GENERATION TO GENERATION HOMILY FOR THE 2ND SUNDAY OF EASTER (DIVINE MERCY SUNDAY) Rev. Fr. Boniface Nkem Anusiem Ph.D. 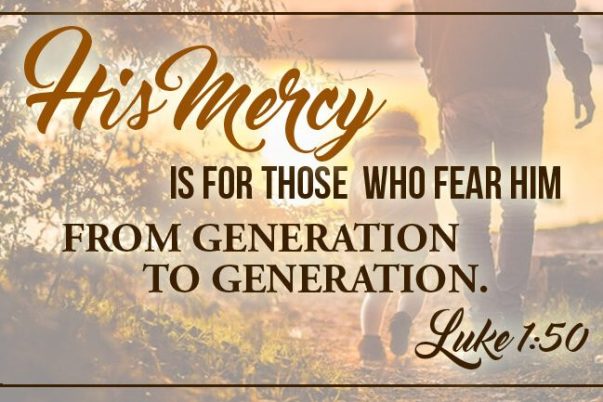 One cold evening in January 1935, the famous three-time mayor of New York City, Fiorello Henry LaGuardia, offered to preside at one of the night courts to relieve a judge for the night. During the night a case comes up about an old granny who stole a loaf of bread from a store; this was during the great depression.

Replying to the allegation of the theft, the senior woman tells LaGuardia that her daughter was sick, and her husband had earlier deserted her and her two grandchildren. She further said that she couldn’t stand her starving grandchildren and had only one option to get them something to eat and because there was nothing on her, she had to steal the bread.

Responding, LaGuardia tells the woman that her crime is punishable by law as nobody should steal from anyone for any reason and he proceeds to say that she should choose between ten days in jail and ten dollars. The grandma was still thinking of what to do when LaGuardia pulls out a ten-dollar bill and pays the fine. Then he says, “I am going to fine everyone in this courtroom fifty cents each for living in a town where a person has to steal bread so that her grandchildren could eat.” The Bailiff collected the fine from everyone in the court including the store owner. After that, LaGuardia handed the entire money ($47.50) to the old woman.

In the narrative above we see how someone who is guilty and who potentially stands to be punished by the law suddenly obtains freedom with free money added. Today being the Second Sunday of Easter, we celebrate Divine Mercy which is God’s uncommon act of not only forgiving us and removing the punishment due to our sins but also providing us with abundant blessings.

Addressing the Fears and Doubts about the Resurrection

The Gospel of today (John 20:19-31) tells us about our Lord’s two-fold visits to the disciples after his resurrection. The Gospel tells us that they were gathered together probably at the Upper Room and had the doors locked for fear of the Jews. Gathering together is excellent but being fearful of the Jews negates the essence of the hope and power of the resurrection. One could understand their confusion with the rapid flow of events from the triumphant entry to Jerusalem through the arrest, scourging, death, and the rising from the dead.

In their debilitating state of fear and confusion, our Lord suddenly appears in their midst and says to them, twice, “peace be unto you.” Here we can see that fear is a notorious peace-killer. The disciples suddenly forgot most of the important instructions of our Lord towards the end of his life. In the Gospel of John (16:33) he anticipated their current situation when he said “I have said this to you so that in me you may have peace. In the world you face persecutions but take courage; I have conquered the world”. Our Lord’s greeting to them also confirms one of his parting statements, “Peace I leave with you; my peace I give to you. I do not give to you as the world gives. Do not let your hearts be troubled, and do not let them be afraid. (John 14:27).

Another aspect of the post-resurrection state of the disciples is the reign of doubt among them. The Gospel narrative today tells us about Thomas who would not believe that Jesus Christ has risen from the dead and insists that unless he sees the wound-spots and touches them, he would not believe.

It will be fitting to remark that Thomas was not the only one in doubt. In the resurrection account by Luke (24:1-14) we learn that when the women recounted their experience at the empty tomb to the eleven their words seemed to them like an idle tale, and they did not believe them. Doubt and fear seem to get hold of the more significant part of us more than faith and hope. Often, we think more in the “cannot” than we do in the “can.” We are often trustful to failure than to success.

Divine Mercy is Everything we Needed

Like the grandmother in our opening story, we stand guilty of a punishable crime, but someone pays for us, not with money as LaGuardia did for the woman but with his own life. St. Paul tells us that Christ died for us while we were still sinners (Romans 5:8). Here, we understand and could appreciate the true meaning of Divine Mercy; God’s pardon to us and reinstatement out His unequable divine love.

God’s mercy which is everlasting and endless (Lam.3:22-23), became very useful when the Word became flesh; that is the incarnation when God decided to dwell among us in the Person of Jesus Christ His only Begotten Son (John 1:14). During his ministry, our Lord’s manifesto shows the contours of Divine Mercy: announcing of the good news, liberation of captives, recovery of sight, and freedom for the oppressed (Luke 4:18).

While sending the twelve apostles on a mission, our Lord Jesus Christ enjoined them to give freely as they have also received freely (Matt.10:8). If Mercy is a Divine facility that is open to all us, there is an urgent need for us to give and spread mercy to everyone especially those who deserve our punishment for their hurts against us.

From what our Lord Jesus Christ did for us on the cross, we understand that forgiveness is not enough as we need to grant mercy to others. On the cross, our Lord said, “Father forgive them for they do not know what they do” (Luke 23:34). He, however, goes further to pay our debt and its punishment when he exclaimed, “it is finished” (John 19:30).

You may be living your life hurting over some things done to you or against you. Don’t get me wrong, it is okay to feel hurt and offended, but it is more meaningful and divine to forgive and show mercy. In our lives, there are many instances when we fail short of God’s expectations, but He keeps the door of mercy open to us. We screw up several times, but each time we come to God, He embraces us with the arms of mercy.

One of the beatitudes tells us that the merciful shall obtain mercy and that means that the “unmerciful” will not receive mercy. The choice is ours to make on this day as we celebrate and embrace Divine Mercy, ensure that someone benefits from your act of mercy and today fits for you to do this.

Have a blessed Divine Mercy Sunday and remain in the power of the resurrection.

3 Comments on “BEYOND OUR DOUBTS: HIS MERCY IS FROM GENERATION TO GENERATION HOMILY FOR THE 2ND SUNDAY OF EASTER (DIVINE MERCY SUNDAY) Rev. Fr. Boniface Nkem Anusiem Ph.D.”