THE POVERTY OF THE RICH HOMILY FOR THE 28TH SUNDAY IN ORDINARY TIME (YEAR B) Rev. Fr. Boniface Nkem Anusiem Ph.D. 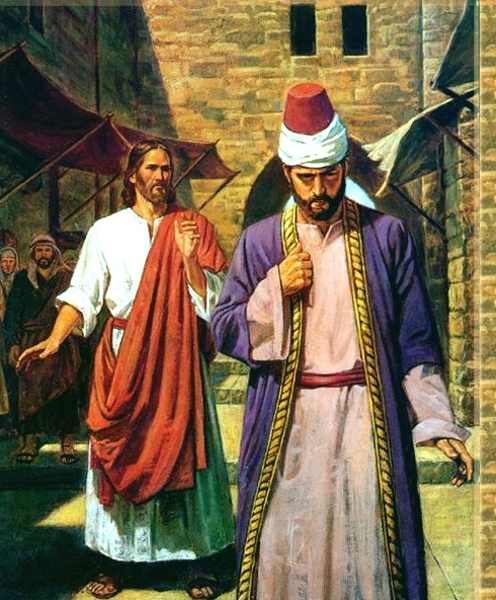 A wealthy woman in her late eighties lived by herself in a mansion next to a community with people living in abject poverty. Her closest friend was her cat, and she loved her so much and would even buy her gold necklaces. At some point, the woman became very ill, and before she passed, she bequeathed all her wealth to her cat to the amazement of everyone.

In the records, the woman directed the executor of her Will to put the cat under the care of two paid nannies. However, after one month, the cat died as she could not survive the death of her owner. After an intense deliberation between the woman’s attorney and the mayor of the city, they agreed to use her wealth to develop the poor community next to her mansion. Sad for the wealthy woman but joy for the impoverished community she neglected during her lifetime.

At the point of death, we cease to be in charge of our wealth, in fact, we become “poor” because nothing goes with us. There is a story about a couple who promised each other to fulfill their wishes at death depending on who goes first. The wife tells her husband to put her jewelry box in the coffin if she dies before him. The man on his part relates that all his money in the bank should go into the coffin if he dies before her. After some years, the man passed, and during the funeral, the wife writes a check in his name and drops it into the coffin before his internment in the cemetery.

In the Gospel Reading of this Sunday (Mark 10:17-30), we read about a rich man who runs up to Jesus as he was setting out on a journey. Catching up with our Lord he kneels and asks, “good teacher what must I do to inherit eternal life? Our Lord replies by first discarding the appellation good as an exclusive reserve for God and goes further to check his status with the commandments.

The rich man replies and says that he has always been obedient to the commandments from his youth. Our Lord looks at him loved him and told him, “you lack one thing. Go, sell what you have and give to the poor and you will have treasure in heaven; then come, follow me.” The rich man’s face fell at these words, and he goes away sad because he had many possessions.

We have a lot to chew from the narrative. First, let us look at the personality of the rich man. We see him running to catch up with Jesus Christ with a sense of urgency. Meeting our Lord, it is surprising to discover that he wanted an answer to a question about how to gain eternal life. We could also recall that he knelt and called Jesus good master. It is not hard in the narrative to see that the rich man in question has all the details civility, reverence of good manners but all these cannot replace love and charity to others especially the poor. Good manners may not presuppose a good soul.

On the issue of observing the commandments, the rich man was excellent; from his youth, he kept all the commandments. The narrative tells us that Jesus looked at him and loved him. Our Lord looked beyond his face to his heart and loved it. But he lacked charity to other which is a prerequisite for entrance into the kingdom of God. Whatever we do or fails to do to others we do or fail to do to Jesus Christ (Matt. 25:40,45).

If we pay closer attention to the narrative, we will discover that the rich man’s good manners and reverence changed when our Lord encouraged him to sell all his possessions, give the money to the poor and come to follow him. We learn that his face fell at those words and he walked away not only from the Lord but also from challenge to do charity, from discipleship and ultimately from inheriting the kingdom of heaven.

The reaction of the rich man to our Lord’s instruction shows that he is under the enslavement of his possessions and lacks the wisdom on the right use of material wealth. The First Reading today tells us that riches are nothing in comparison to wisdom (Wisdom 7:7-11) just as the Psalmist says that in his riches man lacks wisdom, he is like the beasts that are destroyed (Psalm 49:20).

You Lack One Thing!

A lack is the absence of an essential value that should be present. The rich man was apparently in lack. The void in him prompted him to run to our Lord Jesus Christ. He was aware of his lack but wanted to look for a shortcut to eternal life. Despite his wealth, he was in poverty because he lacked the wisdom to practice charity.

At this point, it would be very fitting to examine our lives to know where we are lacking. You may be lacking in charity like the rich man; it could be your inability to forgive and let go or any other kind of lack. What do you lack?

The accurate measure of wealth does not depend on how much we have but, on our readiness, to give to others. Whatever wealth we have is a gracious gift from God. St. Peter instructs that as generous distributors of God’s manifold grace, we should put our gifts at the service one another; each in the measure he or she has received (1 Pet. 4:10).

Gaur Gopal Das once said that some people are so poor that the only thing they have is money; there is more to life than money, he adds. This statement relates to the poverty of the rich which builds on the lack of charity and insensitivity to the plight of the poor.

In life, people don’t care about how much you know, but they would like to know how much you care and according to Winston Churchill, we make a living by what we get, but we make a life by what we give. The rich man missed an opportunity to obtain heavenly life because he wanted to preserve his earthly living. Today, we are invited to seek the kingdom of God, and its righteousness and all other things will become ours (Matt. 6:33).

As we move out from the Church today, may we try to accomplish what the rich man failed to do due to his poverty of wisdom. Have a beautiful Sunday and a wonderful week ahead. God bless you!

One Comment on “THE POVERTY OF THE RICH HOMILY FOR THE 28TH SUNDAY IN ORDINARY TIME (YEAR B) Rev. Fr. Boniface Nkem Anusiem Ph.D.”