THE TOUCH OF FAITH: HOMILY FOR THE 13TH SUNDAY IN ORDINARY TIME OF THE YEAR (B) Rev. Fr. Boniface nkem Anusiem PhD 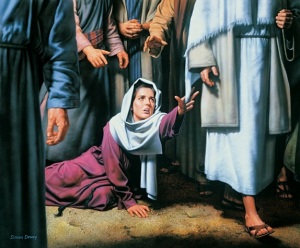 Touching is an activity that is very common among human being and animals; in fact it is difficult not to touch or be touched. It has to do with coming into contact with somebody or something either mildly or violently. This is what we experience in hugs, handshakes, pats, blows, punches, tickling, slaps and others. There is another sense in which touch supersedes physical touch; this is where the mind, soul and spirit are involved. From this viewpoint we often say that we are touched by what we heard, saw, imagined, thought and so on. Here we speak of emotional, psychological, and / or spiritual touch. However, in some situations, a physical touch can have some emotional, psychological and spiritual effects. The interconnection between physical touch and the resultant spiritual effect will preoccupy us later.

As Jesus our Lord crossed over, Jarius one of the leaders of the local Synagogue came to him fell at his feet and earnestly pleaded that he save the daughter who was at the point of death. Among the Jews embracing someone’s feet indicates humility and needfulness. The man Jarius was an important person in the community. He had easy access to Jesus Christ. The great crowd of people recognized him and gave way for him to meet Jesus. His prostrating before Jesus and asking for the healing of the daughter meant a lot. He recognized Jesus as the only solution to a problem that nobody could solve. He kept aside his position and the general aversion for Jesus by the officials of the day. This man whose name (Jarius) means “he will awaken” came with faith; he was sure that with Jesus the child will rise again. He was not in doubt if Jesus could heal the daughter; he only wished that Jesus had the time to come to see the child. The response Jesus gave was prompt and immediate (Mark 5:24).

The large crowd still followed Jesus as he was going to Jarius’ house. However something happened along the way. A woman whose name was not given because she was “nobody”, she was unclean, she had suffered from haemorrhages (issue of blood) for twelve years, the exact age of the daughter of Jarius appeared. She had been unclean and “unclean” actually became her name. She was not supposed to touch or be touched because that would make a clean person ceremonially unclean for the rest of the day. This woman heard that Jesus was passing by. She reasoned that this same man who changed water into wine, who cured the famous demoniac the other side of the sea could as well make her clean. She marched out with faith to Jesus. But unlike Jarius she had no easy access. However she was not discouraged. She struggled through the crowd meaning to touch the helm of the garment of Jesus Christ. She believed that she will be healed by doing so. We can imagine her plight, she was evidently weak and frail, she could have been pushed down several times in the bid to touch our Lord, she could have been insulted, scolded, antagonized, but she did not relent until she touched the helm of the garment of our Lord. When she finally did she was instantly healed!

The touch Jesus received was significantly different from the ones he had been receiving so he stopped and asked who touched me! This might have appeared to be a senseless question as the disciples established. This was because the crowd was so much and many people were pressing round him. But Jesus was right; someone actually touched him in a way that was different from others. Now there were three different types of touch that our Lord Jesus Christ received on that day:

While all these were happening, Jarius was patiently waiting and surely the child was also dying or had died as was reported later. Jarius was not only humble; he was also a patient man. Patience is another virtue we can take home from today’s gospel. While the woman who had the haemorrhages waited patiently for twelve years, Jarius had to wait patiently for few minutes for the woman to be healed. This is reminiscent of the word of God in Psalm (37:7): “Be patient and wait for the Lord to act”. Another says: I wait patiently for God to save me; I depend on him alone”. (Psalm 62:1). We really have to be patient because God’s own time is the best.

On the part of our Lord Jesus Christ he had no preferential treatment for the rich and the more important in the community. His coming is for all. St. Paul made this very clear in the letter to the Galatians (3:28-29). Jesus did not see his stopping to attend to the woman as waste of time. Though the woman had been healed but he wanted the crowd to know that there is a touch of faith that is more rewarding and helpful than the familiarity and accidental touch. Jesus used the opportunity to rename the woman from Mrs. Unclean to Mrs. Cleansed and Healed! He used the opportunity to make a public acknowledgement of the power of faith in God, which is the assurance of things hoped for, and certainty of things not seen (Heb. 11:1).

It seemed useless continuing the journey to the house of Jarius because the little child had died. But for Jesus she was sleeping, if you like she was waiting for the Lord to ask her to get up. This was not the only place Jesus made reference to death as sleep. In John (11:11) when Lazarus died he said that he was sleeping and he was going to wake him up. It is actually clear that only Jesus can wake us up from any kind of sleep. Sleep here can mean sickness, problems, difficulties, challenges, temptations, and all forms of evil. No sleep will be too deep for our Lord Jesus Christ. Jesus entered Jarius’ house with three of his apostles and there he asked the little girl to get up. (Talitha Cumi). And she got up and began to walk around.

Using the woman with the issue of blood as an instance, she had faith and was ready to make a touch of faith, but she did not have easy access to Jesus. In our time we have free and easy access to Jesus Christ especially in the Most Blessed Sacrament, but how many of us touch (receive) with faith? Today we have allowed the crowd of sin, the crowd of godlessness, the crowd of worldliness to stand between us and our Lord Jesus Christ the author of our faith.

Often we allow the crowd in form of tribulations to render us faithless and thus unpleasing to God (Heb.11:6). It is always at the most trying times that our faith can be gauged rightly. I will like to end with this story. In 1871, tragedy struck Chicago as fire ravaged the city. When it was finally extinguished, the fire had taken over 300 lives and had left some 100,000 homeless. A man by the name of Horatio Gates Spafford was one of those who tried to help the people of the city get back on their feet. Spafford, a Chicago lawyer, who had invested heavily into the downtown area, lost everything as a result of that fire. More tragically, Spafford had also suffered the loss his only son just a year earlier. Still, for two years Spafford assisted the homeless, impoverished, grief-stricken and others ruined by the fire.

After about two years of such work, Spafford and his family decided to take a vacation. They were to go to England to join Moody and Ira Sankey on one of their evangelistic crusades, then travel to Europe. Horatio Spafford was delayed by some business, but sent his family on ahead. He would catch up with them on the other side of the Atlantic.

Their ship, the Ville de Havre, never made it. Off Newfoundland, it collided with an English sailing ship, the Loch Earn, and sank within 20 minutes. Though Horatio’s wife, Anna, was able to cling to a piece of floating wreckage (one of only 47 survivors among hundreds), their four daughters Maggie, Tanetta, Annie, and Bessie were killed. Horatio received a horrible telegram from his wife, only two words long: “Saved alone.”

Spafford boarded the next available ship to be near his grieving wife. When the ship passed near the spot where his daughters died, Spafford penned these precious words drawing strength from 2 kings 4:26:

When peace, like a river attendeth my way,
When sorrows like sea billows roll.
Whatever my lot, Thou hast taught me to say,
It is well, it is well, with my soul.

Tho Satan should buffet, tho trials should come,
Let this blest assurance control,
That Christ hath regarded my helpless estate,
And hath shed His own blood for my soul!

Like Spafford, we always need to keep a touch of faith on God no matter the situation in our lives. We need to cross over to the other side and repose our faith and trust in God whose grace is sufficient for us. Like the woman with the issue of blood, we have our various issues and we need to persevere in the face of our trials and stretch out to touch our Lord Jesus Christ. Like Jarius we need to humble ourselves before God and also be patient with and wait for his own time when he will touch us like his daughter.

Do have a happy Sunday and a wonderful week ahead.

One Comment on “THE TOUCH OF FAITH: HOMILY FOR THE 13TH SUNDAY IN ORDINARY TIME OF THE YEAR (B) Rev. Fr. Boniface nkem Anusiem PhD”