DIVINE MERCY AT THE SERVICE OF PEACE AND COMMUNION HOMILY FOR THE 2ND SUNDAY OF EASTER (A.K.A DIVINE MERCY SUNDAY YEAR B) Rev. Fr. Boniface Nkem Anusiem PhD 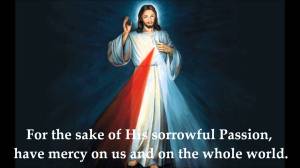 There was this missionary who was in the habit of going around the town and sharing spiritual flyers to people. Soon, one little boy joined him in carrying out this mission of touching lives through flyers that were really elating. They did this every Sunday unabated. One fateful Sunday it was raining profusely and the missionary decided not to go out for the distribution of the flyers he made that week which was captioned “Hold on! There is still hope”. He was however surprised when the little boy showed up not minding the heavy rain. The missionary was shocked that the boy could make it but asked him to drop the idea of giving out flyers that Sunday. It happened that the boy insisted that he had raincoat and an umbrella so the rain would not be a hindrance.

After some moments of argument the boy’s persistence made the missionary to allow him to go. He was excited as he ran into the rain and instead of their normal visits to parks and walkways he went from house to house knocking and dropping the flyer to whomsoever opened the door. He spent so much time doing this and at the last house he visited he knocked for about five minutes but there was no response. He made to go but decided to knock and wait further. He was about giving up when an old woman opened the door. Smiling he gave her the flyer and saying “this message is from God”. The boy left and was deeply happy that he had accomplished the task for that Sunday.

She had fixed the rope and was about putting her neck and kicking the stool off her feet when someone kept knocking on the door. She took some time thinking that the person would go away but the person continued. She came down went to the door and found a little boy with a flyer who said to her “this message is from God”. Opening the flyer she saw the caption “Hold on! There is still hope”. She sat down and read. After reading the flyer, she felt an inner peace and saw reason to live and to be happy. She saw herself as a blessed and lucky woman. She went up and disengaged the rope and was thankful to the little boy who dared the rain to come and give her that message of peace. Incidentally the boy and the missionary where in the Church and they were utterly speechless.

There are some moments in our lives when the whole world seems to be crashing on our heads. It could be a situation of confusion, fear of the unknown and more severely absence of peace due to some experiences or encounters which at times seem to signal that God had abandoned us. At such moments some people tend to be utterly confused and restless. Others in a bid to find solace take to some activities that end up aggravating and increasing their problems.

The above situation could have been the apt description of the apostles faced when our Lord Jesus Christ was arrested, bullied, killed and buried. They were devastated and scattered (Zech.13:7). However the resurrection was meant to mark a turning point for them (to bring them back from where they have been scattered- Isaiah 54:7) but they were still afraid, confused, faithless and lacked peace. St. Augustine defined peace as the tranquillity that comes from order and order is the proper arranging of all parts. This means that peace results when things are properly ordered within and outside of an individual.

From what happened when Jesus Christ was arrested one could attest to the fact that the apostles lost every sign of order as they lost hope and were ultimately disturbed; peace went on vacation and they were scattered (Matt.26:31) . They actually took refuge at the upper room where they locked the doors for fear of the Jews (John 20:19). The upper room became for them a comfort zone; but how long will they continue to be inside a locked room? Often we build upper rooms for ourselves not for prayers like on the day Pentecost (Acts 2:1) but for hiding on account of fears.

Coming to them on the evening of the resurrection day, the initial words of our Lord to them captured the situation they were in. To them he said: “Peace be with you!” This phrase should be understood as addressing their situation. Jesus couldn’t have wished them peace if they were enjoying peace. Hence he meant to tell them to replace their troubled minds and confused heads with peace from the power of the resurrection. When our Lord appeared to them he said “peace be with you” not just once but twice and yet one more time after eight days when the doubting Thomas was present.

The emphasis on PEACE showed its expediency. It is also understandable that one challenge led to the other. With the absence of peace the apostles became hopeless and faithless. It needed the physical presence of Jesus Christ to lead them out of fear into faith from devastation to peace. There is actually a link from disillusion to fear and lack of divine touch and connection. We could thus say that there was at that point the absence of faith, peace and divine mercy but the resurrection of Jesus was meant to lead them to the realisation of all these divine benefits.

Our Lord Jesus Christ came to undo our past and to restore our loses. By the power of his resurrection our fear is defeated and our faith is renewed. Thomas in the gospel of today stands as a representative of our doubt and faithlessness. He was not around the first time our Lord appeared to the others. We are not told where he went. He missed that first encounter with the risen Lord; we also remember that on that first meeting our Lord breathed on them and said “receive the Holy Spirit”  (John 20:21). After he also sent them on the mission to evangelize and forgive sins.

Being absent from the encounter with Christ and the reception of the Holy Spirit of God, (though he was lucky to be present on the day of Pentecost Act 2:1ff) Thomas was not renewed with other so he continued to live in the past condition of fear, doubt and lack of peace. No wonder he stood his ground that he would not believe unless he sees and touches. This is contrary to the divine injunction that our faith should be certain even when we have not seen and should also be an assurance of the things we hoped for (Heb. 11:1ff).

When we are disconnected from God through our absence from the sacraments and from hearing the word of God we live in fear and lack the needed peace. When we are disconnected from God we run the risk of being unable to receive the infusion of the Holy Spirit and the divine commissioning. Like Thomas we fall into doubt and disbelief because we missed the divine action.

The resurrection of our Lord Jesus Christ is the highest expression of divine mercy which began with his death on the cross which marked the paying of our debts and our liberation from sin and death. It was actually divine mercy that can describe the coming of Jesus Christ in our midst. It was divine mercy that moved him to die for us even when we were still sinners (Romans 5:8; Psalm 78:32). That same divine mercy brought about his resurrection because if he did not rise from the death we could have been at lost with vain hope (1 Cor.15:12-14). With God’s mercy on us we are expected to show mercy to others (Luke 6:36).

If one looks round the world one would discover that one of the problems facing our worlds is disaffection and inattention to mercy for one another. The uprisings and wars around our globe are end products of lack of mercy and pardon. God not only sent his Son to die on account of our sins and cancelled our debt he also granted us pardon and mercy. No wonder that on this day our Lord in his commission told the apostles to forgive sins; that is to grant pardon. This is an indication that with the resurrection of Jesus Christ divine mercy has been granted to us. It is one of the indications of the sacrament of penance through which our sins are forgiven and we are granted mercy and pardon.

When we experience divine mercy, we receive peace and that peace helps us to build and maintain an enduring community. This was the case with the early community formed by the apostles after the resurrection of our Lord Jesus Christ. In the First Reading today (Acts 4:32-35) we are told that the company of those who believed were of one heart and soul. This means that were united in peace governed by love.

Let this day be for us a day to reflect on God’s search for us in spite of our sinfulness (like the boy in our story defied the rain to share the life changing flyers). Let it be an opportunity for us to drop the garment of fear of anything and rejoice over the resurrection of Christ. Let it be a moment of faith for us to undo the doubts of Thomas. Let it also be for us an opportunity show mercy to others especially those who have wronged us knowing fully that God is always forgiving us and granting us divine mercy without which we cannot stand (Psalm 130:3). It is be also a day for us to revitalize our communities by giving peace a chance.

Have a blissful Sunday and remain awesomely blessed in the week ahead!