FROM THE TRIUMPHANT ENTRY TO THE TRIUMPHAL PASSION HOMILY FOR THE PASSION (PALM) SUNDAY Rev. Fr. Boniface Nkem Anusiem PhD 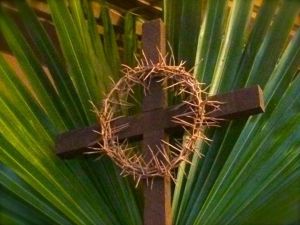 Once upon a time in Haarlem, a city in Netherlands, there lived a young boy called Hans Brinker. One evening, he asked his mother to allow him to visit his friend, a blind old man and to present some cakes to him. His Mother allowed him and after spending some quality time with this old friend, he started making his way home. It was actually getting late and he increased his pace.

As he was passing through the dikes (the stonewalls that prevented the North Sea from overflowing into the city), he noticed a leakage; the sea water was flowing in rapidly through a tiny hole on the dike. The little boy stopped on his way and looked at the leakage. He was convinced within his little but reflective mind that if nothing was done immediately, the entire city and even the whole country would be taking up by the sea.

Going closer to the leakage, Hans Brinker could only think of one thing, inserting one of his fingers into the opening from where the water leaked and the leakage stopped. However, he could not move because he was convinced that if he left that the sea water would empty into their city and indeed the entire Holland. Consequently the little boy stayed on all through the cold night with his numb finger inserted into the hole. He remained there till morning when his parents were on their way to the blind old man’s house to check him out.

The young heroic Hans saved the whole city and indeed the entire Holland with a little finger stuck into a leaking hole on the dike. He endured the cold and a sleepless night to save the people. While the rest of the city was asleep, a young boy was awake and in pain so that they could live.

The Holy Week commences today with the ceremonies of the Palm Sunday. Today our Lord Jesus Christ gallantly entered Jerusalem not for merriment but for some painful encounter which included accusations, condemnation, insults, beating, crucifixion and death. From the celebration today we notice a quick transition from joy to sadness, from the sanguine shouts of joy to the melancholic face of gloom. The two situations jointly reflect our human experience. There are points of joy and points of sorrow, there are ups and downs but with God there is an end to all ill situations. It is all about staying focused and looking at the end like the young boy in our story.

Before the procession that led us into the Church, we heard the Gospel Reading (Matt. 21:1-11) where we are told that our Lord asked two of his disciples to go into the village facing Bethphage where they would see a donkey tied to a tree. He further told them to untie it and bring it to him. And should anyone question them they should say that the Master needed it urgently. This directive which fulfils the oracle of Zechariah (9:9) gives us ponderable lessons.

The donkey represents our souls that God needs urgently. The coming of Jesus Christ into our context is to untie our souls from the tree of sin. The tree around which the donkey was tied reminds us of the tree at the middle of the Garden of Eden in Genesis (3:3) where Adam and eve contracted the sin of disobedience which befell humanity. Furthermore, the Village is known as Bethphage and the name means “house of unripe fruits”. We can clearly see from the name that the soul is suffering from deficiency; if you like unripe. Christ our Lord came not only to undo the power of that tree and replace it with the tree of redemption namely the Cross of Calvary but also to raise the donkey from being unripe and unfit to being ripe and fit for the harvest.

Attentive to the foregoing, we understand that the Lord has need for our souls that have been tied securely on the stake of sin and damnation. He has come to deliver our souls from its prison of abandonment to the tree of sin outside Jerusalem into the Jerusalem of redemption. Our Lord’s triumphant entry into Jerusalem marks the actual beginning of the triumph over sin and death that have besieged our souls being represented by the Donkey upon which he rode. The highest point of the triumph will be his death on the cross and his resurrection on the third day!

From the passion reading we just heard from the account of St. Matthew, we discover that between the entry and the crucifixion there was so much suffering. The concept of suffering had elicited so much discussion among thinkers from various areas of specialization. Often, the question revolves around why God should allow His Son to go through the route of suffering in order to save us. Without going into much debate, we can actually point out here that God allowed our Lord Jesus Christ to suffer for our sake because it was the only way for our redemption to come about. In the Acts of the Apostles (Acts 3:18) we are told that the suffering of Christ is part of the fulfilment of God’s words through the prophets.

In the Old Testament, people offered up animals as victims without blemish to atone for one sin or the other. But in the New Testament we have only one victim who is capable to taking away the sins of the world (John 1:29). To be able to accomplish the work of freeing us, our Lord had to suffer, shed his blood and die! The harsh reply of our Lord to Peter (“Get behind me Satan”) when he wanted to discourage him from going the way of suffering tells us that the suffering of our Lord Jesus Christ issues from the irreprehensible will of God (Matt.16:23)

After the triumphant entry with Palms and the singing of hosanna came the passion of the Lord. We can fully appreciate and understand the Lord’s passion on three centres of gravity. These represent the three important places and instances where our Lord suffered under three different hands.

At Gethsemane our Lord Jesus Christ suffered in the hands of Satan. In Luke (4:13) we are meant to understand that after the temptation, the devil left Jesus Christ and waited for an opportune time. Gethsemane represents one of such opportune moments for the devil to attempt at stopping the redemptive work of Christ. The depressing and agonizing monologue our Lord had in the garden showed clearly that he was troubled and deeply distressed (Mark 14:33). In the account of Matthew (26:37) our Lord said: “my soul is sorrowful unto death”.

At that point, he was feeling the impact of the load of our sins and the devil was at hand to discourage him from carrying the load of our sins. At Gethsemane Christ shuddered before the cup of God’s wrath upon our sins that was orchestrated by the Satan. Often we get “beautiful suggestions” from the devil on our way to do the will of God which may involve some suffering. Gethsemane actually means “oil press”. It thus appears that the load of our sins was pressed upon him that it seemed to be too much for him to bear. No wonder then he asked if the cup could pass, but let the will of God be done.

At Gabbatha, as Isaiah (53:3ff) prophesied, he was betrayed, deserted, beaten, rejected, mocked, scourged, crowned with thorns and condemned to die  by those he came to untie from the tree of sin.

At Golgotha our Lord Jesus Christ suffered in the hands of divinity; he suffered in the hands of his own father. But this suffering is unlike the preceding ones because it is the kind that is sacrificial. It was the kind of suffering that was most needful for our redemption. The kind of suffering that St. Paul recommended to the followers of Christ (Philippians 1:29).

At Golgotha God dealt with sin fully and finally in the body of his own son. At Golgotha our Lord Jesus Christ suffered in his full humanity and did not count on his equality with God (Phil.2:7) At Golgotha the Father forsook the Son (Mark 15:34) and allowed him to taste the bitter gall of death so that humanity can be saved and be reunited with the Father once more.

We are called within this Holy Week to make an active connection with our Lord Jesus Christ in his suffering and death. There is need for us to be “Holy Strong” in the Holy Week and not “Holy Weak”. We become Holy Weak when we remain inactive and unmotivated by the transforming activities lines up within the Holy Week. We become Holy Weak when the passion and death of our Lord Jesus Christ fails to find a place in our lives. The only way we can appreciate our Lord for what he did for us in the manner of the young boy in our story (but more than him) is to make a harvest of holy and committed lives within this period. Holland was saved by little boy’s finger but humanity was saved by our Lord Jesus Christ who gave not just his finger but everything so that we can be saved.

Do have a wonderful and inspiring Holy Week.