BUILDING A FAMILY OF FAITH HOMILY FOR THE FEAST OF THE HOLY FAMILY OF JESUS, MARY AND JOSEPH Rev. Fr. Boniface Nkem Anusiem PhD 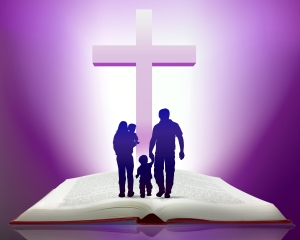 Once upon a time a woman became pregnant about three years after her first child named Michael. Like any good mother, the woman did what she could to prepare Michael for a new sibling. They found out that the new baby was going be a girl, and day after day, night after night, Michael sang to his sister in his Mommy’s tummy. He was building a bond of love with his little sister before he even met her and her mother confessed that the girl would start moving whenever Michael sang to her.

When it was time for the woman to deliver she got into extreme labour pains. She spent so many hours in the labour room trying to bring forth her second child but the process was so painful and excruciating. The doctors started making plans for a Caesarean section when the woman eventually delivered. But the new born child was extremely tired and was finding it hard to breathe. In fact the situation became an emergency and the child was rushed to a neonatal intensive care unit with an ambulance.

The little girl got worse every day as her energy level continued to drop. The paediatrician even had to tell the parents that her chances of survival was so minimal and that they should be prepared for the worst. The woman and her husband started making arrangement for a burial since it was clear that the little baby was not getting better. As all these were going on, Michael kept begging his parents to let him see his sister and sing to her. However he was told that children are not allowed to go into the intensive care unit. “I want to sing to her,” he kept saying with so much intensity and persistence. Michael’s mother could no longer contain her son’s worries and so she decided to take him into the intensive care not minding the medical instructions. The head nurse tried to stop her but she insisted that Michael would not go until he sings to his sister. The nurse reluctantly allowed them though still filled with anger.

When Michael got there he started singing: “You are my sunshine, my only sunshine, you make me happy when skies are dark; you are sister for ever!” Instantly and amazingly the baby girl started to respond by smiling and moving her tiny limps and she started normalizing. The pulse rate began to calm down and become steady. Michael’s mother screamed and encouraged the little boy to continue singing and he kept on singing and the little sister kept on being better. Soon all the nurses and doctors came out to behold with tears the wonderful miracle of healing from a brother’s song to her dying sister.

As God would have it, the very next day the little girl was well enough to go home and they were discharged from the hospital. The little girl in this story is called Marlee she was born in 1992 and the miracle of the bother’s song took place in St. Mary’s Hospital Knoxville Tennessee. She grew up to be a great singer both in school and in the Church.

It is common to ask after any story the lessons learnt… There could many answers that would be fitting like love, compassion, care etc. However, I am more drawn to the lesson of FAITH. In fact that is the hidden power in the song of Michael. One very interesting definition of faith that is most outstanding and lasting is the definition from the letter to the Hebrew (11:1-2): “Now faith is the assurance of things hoped for, the conviction of things not seen. For by it the men of old received divine approval”. (RSVCE).

The First Reading today (Gen.15:1-6;21:1-3) and the Second Reading (Heb.11:8.11-12.17-19) are directed to the fate of the faithful Abraham. We already know that God had promised him that he would make him the father of a great nation (Gen.12:2) but this promise seemed to be taking time before fulfilment. Naturally Abraham was worried and that was why on this day he asked “O Lord God, what will you give me, for I continue childless and the heir of my house is Eliezer of Damascus?” God promised Abraham that he should not fear as he would shield him and make him great. To make it more practical God showed him the numberless stars on the sky and told him that his descendants will like that.

The success of Abraham is his unwavering faith in God. He was a man who had strong faith and trust in God right from the time he was asked to leave his father’s house and his people to a place God was going to show Him he moved without arguing.  The Letter to the Hebrews which formed our Second Reading today extolled the faith of Abraham in God as the driving force of his life. Abraham received special blessings and favours from God on account of his faith. That explains why the letter to the Hebrews would say that it is impossible to please God without faith. (Heb. 11:6).

The Gospel Reading today (Luke 2:22-40) though focused on the family event of the presentation of our Lord Jesus Christ in the temple is still not unconnected with the phenomenon of faith. We are in the episode presented with individuals with exceptional faith and trust in God’s divine direction:

Today being the Feast of the Holy Family we all invited to take some time and reflect on the nature and drive of faith within our families. The family remains the basic unit of the human society as well as our early learning centre. Just like we say that charity begins at home so are also other things that are evil. Faith or fear; trust or distrust are all elements that have roots in the family. The way and manner a family is committed to God in faith determines what they get and how their life would run its course.

Many families in the world today are facing a lot of challenges. These challenges come in various ways, shapes and sizes. Some families have been divided into several pieces on account of these challenges because oftentimes people face the wrong direction when problems come upon them. The truth we must accept is that there is no perfect family in the world. There is also no family without one form of trial or the other; of course without a test of our faith there would not be a testimony.

Abraham and Sarah had their own period of family agony when no child was forth-coming in spite of the promises of God to Abraham which included but not restricted to making him the father of a great nation. They were not discouraged, they continued to wait and trust in God with faith. Unlike many of us today who would run to some worthless directions for assistance. Mary and Joseph had their times of trials but they kept their faith in God alive. When they had nowhere to stay for the birth of their child God provided a manger, when Herod wanted to kill the infant Jesus God took them to Egypt, when the child Jesus got missing God directed them to the temple where he was found. When Jesus was arrested, beaten and executed, God provided a resurrection on the third day.

Faith is the flame each family needs to fan at this point in time. Christmas is a celebration of God’s faithfulness to His promises to us and we are expected to celebrate it with faith starting from our various families. The family is seriously at risk at this point in time with the challenges of the modern times. It is the devil’s plan to destroy the world starting with the family. There is need for every family to cultivated deep commitment to God through fervent prayers. Prayer has a way of turning a house into a home and when a family stops praying it starts perishing.

We can recall the persistence of Michael to sing to his little sister which turned out to be a miraculous healing for her. We all need to be at the service of each other and supporting each other in our families. This is the time to pull down the walls of enmity, separation and division that has been the causes of our failures all these while. There is need for every family to be reconstructed and renewed. This is the time for forgiveness because there is not future without forgiveness.

As we celebrate the feast of the Holy Family, let us also remember that our family needs to become holy. To be holy as a family has to do with having God at the centre of our lives, listening to Him, believing in Him and doing His will at all times like we saw with Abraham and the family of Nazareth. Making our families holy is a matter of not giving the devil an opportunity to come and bring about destruction in our families (I Peter 5:8).

Have a blissful celebration and remain blessed.