#EAT MY FLESH AND DRINK MY BLOOD: REFLECTION FOR THE SOLEMNITY OF THE BODY AND BLOOD OF CHRIST Rev. Fr. Boniface Nkem Anusiem PhD 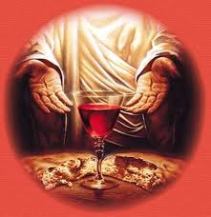 On the eleventh of August 2013, something very remarkable and astonishing happened. It was a Sunday and I celebrated Mass for my vibrant congregation. I remember that my homily that day dwelt on the “SECRETS OF ETERNAL TREASURE” drawing from the gospel of Luke (12:32-48). Among other things our Lord Jesus Christ gave helpful instructions about storing our treasures eternally. In fact he said: “Provide yourselves with purses that do not grow old, with a treasure in the heavens that does not fail where no thief approaches and no moth destroys. For where your treasure is your heart will also be”

After the mass, I left to attend to some sick and aged people as I would do most Sundays. Of course I went with Holy Communion; the greatest treasure ever. I attended to two of them and was making my way back when a very striking mishap took place. I was driving behind a man on one of the major roads in the city when suddenly the man decided, without warning, to do a U-turn. His manoeuvre was unprecedented and sudden. I tried all I could to evade a head-on collision, but it was rather late and dangerously near. What followed was a collision that sent me and my car off the road to an unprecedented location (fortunately no car was behind me on that busy road); it was as if my whole being was switched off for a moment. When I regained consciousness, I saw some people surrounding me and asking me if I was alright. It was then that it dawned on me that I just had a very nasty accident that made the battery in my car to explode, the bonnet was rumpled like one could do to a piece of paper, the driver’s door was also ruptured.

I came out from the wreck without any scratch; in fact a medical examination afterwards declared me fit as a fiddle. But that was not the high point. The most amazing thing was that Holy Communion I was having in the car was untouched; in fact the place I kept Sacred Species was unaffected by the accident. There will be no need to ask why I came out from that dastardly ugly incident unhurt because the answer is not far-fetched. Our Lord Jesus Christ actually fulfilled his promise of Matthew (28:20b) “I will be with you always to the end of time”. He is absolutely with us but more profoundly in the sacrament of the Holy Eucharist. All these amazing graces brought about the erection of a magnificent chapel of perpetual adoration after my anniversary at the instance of my friends.

Today is the Solemnity of the Body and Blood of Jesus Christ. Today we celebrate God’s most precious gift to us; the eternal treasure we must accept and appreciate. It all began in the gospel of John (6:33-58) when our Lord took time to tell his hearers about the real food and drink namely, his body and his blood. As was expected, they could not understand how one should eat his flesh and drink his blood in order to have life; “are we cannibals?” They had asked. It was during the last Supper that our Lord Jesus Christ ritualized the Holy Eucharist when after the Supper he took bread and blessing it gave it to them saying “take and eat this is my body” and in the same way he took the cup filled with wine and said “take and drink this is my blood”.  (Matt. 26:26-30 Mk. 14:22-26; Luke 22: 14-20; I Cor. 11:23-25).

This is yet another mystery which could be hard for human reason to grasp unaided by sublime faith. It is important to note that once there is a substantial change of the bread and wine into the body and blood of our Lord Jesus Christ, the change remains even after the Eucharistic celebration. This is actually why the Sacred Species of Christ’s body are preserved in the tabernacle and (or) exposed for adoration.

Transubstantiation which is creedal to the Catholic faith is distinguishable and opposed to the following:

Many people have found this doctrine a lot puzzling and difficult to contain. In response to this, some miraculous events had taken place to convince doubting minds; these are called the Eucharistic miracles.

THE EFFECTS OF THE HOLY EUCHARIST IN OUR LIVES.

These special attributes of the Holy Eucharist can only come to fruition in our lives if we are spiritually and inwardly ready to participate without the consciousness of any sin. Judas received and the devil entered into him. When you receive, do you experience something positive or do you relapse into further sin. What comes over you after partaking? Do you receive because other people are receiving or because you are in a state of grace? When last did you receive the Holy Eucharist in absolute state of innocence? It is called the sacrament of Holy Communion; do you experience by your reception a Holy Communion with Jesus Christ and with the members of the worshipping community? Will Jesus Christ be glad to dwell in you as you come along today to receive him?

There is a story about a group of Americans and Russians undertaking a joint exploration in the high sea. During lunch they usually bring along their respective country’s delicacies to share among themselves. One day a Russian came along with the Russian bread which is black, hard and sweet. An American took interest in the bread and taking a slice, he took a bite and instantly he snapped a tooth. In desperation he said: “What a lousy communist bread” and threw the piece over board. The Russian who brought the bread said: “No it is rather your rotten capitalist tooth that made you snap a tooth”. The Holy Eucharist is powerful itself as the true body and blood, soul and soul and divinity of our Lord Jesus Christ. Hence if you do not get the spiritual effect from its reception then you must check your life very well.

2 Comments on “#EAT MY FLESH AND DRINK MY BLOOD: REFLECTION FOR THE SOLEMNITY OF THE BODY AND BLOOD OF CHRIST Rev. Fr. Boniface Nkem Anusiem PhD”