CAUGHT IN THE VERY ACT BUT NOT CUT OUT: HOMILY FOR THE 5TH SUNDAY OF LENT (YEAR C). Rev. Fr. Boniface Nkem Anusiem PhD

Imagine being caught red-handed doing something morally bad! It could be while telling a beautiful lie to excuse oneself, skillfully taking something that does not belong to oneself, manipulating a situation to favour oneself like cheating in an examination, being caught by the person one is gossiping about, or more shamefully, being seen in an emotionally unwholesome position with someone who is not one’s spouse. In our popular parlance when people are caught in such acts we hear things like:

Today in the gospel (Luke 8:1-11) while Jesus was teaching in the temple a woman who was caught in the very act of adultery was brought to Jesus by the Pharisees and the Scribes. They wanted Jesus to pronounce her execution as an authority with the pre-knowledge of the provision of the law that such a person should be stoned to death (Deut. 22:22). St. John however made us to know that the whole plot was set to put Jesus to the test. If you check out the Law of Moses concerning this act you will discover that they contravened that law. In the Mosaic Law, the process when adultery is discovered involves:

From the above explanation one will discover that those who brought the woman to Jesus Christ were trying to achieve the following:

In the face of all these, our Lord Jesus Christ remained calm and went on writing on the ground. John did not tell us what he was writing but we can conjecture from the reaction of those who brought the woman. We are told that they started leaving from the place starting from the eldest when he stood up and said whoever among you here is without sin let him be the first to cast a stone on the woman. Some commentators would say that he listed their names and similar sins they have committed beginning from the eldest and this could have been very likely.

When they had left Jesus asked the woman: “where are they? Has no one condemned you?” She said “No one Lord”. And Jesus said “Neither do I condemn you; go and do not sin again”. Here we have so much to learn from the Pharisees and the Scribes, the woman and Jesus Christ.

1. Lessons from the Pharisees and Scribes:

Often times we are quick and ready to find faults in others and to condemn them. It is easier for us to see the mistakes and misdeeds of other people than ours. It was to this effect that Jesus warned us not to judge so that we may not be judged (Matt. 7:1) and to remove the plank in our own eyes so that we can see clearly enough to remove the speck in our neighbour’s eyes (Matt. 7:5).

2. Lessons from the Woman caught in the very act.

I have seen this written somewhere: “Admit it when you are wrong”. This is often a very big task for many of us. We would like to defend and rationalize over our sins and offences. We often try to excuse ourselves from the things we have done with our full senses and faculties in place. The devil is often blamed. Sometimes we blame our families, backgrounds, friends, the government and even God. The blaming game is a very popular one in the world.

With this woman we notice a different disposition. She accepted her situation without blaming anyone. Her silence and comportment disclosed the fact that she accepted the fact that she was a sinner and that she was ready to face her fate. The people who brought her to Jesus wanted to use her as bait to test Jesus and as well achieve another goal of condemning her. But with Jesus everything changed for her:

We are very much like this woman as we all have sinned and have come short of the glory of God (Rom. 3:23). God is always catching us red-handed in the very act of committing sin yet like this woman, He gives us another chance. In fact with God there are many chances for us to undo our past with a better future. The words of the first reading (Isaiah 43:16-21) seem to be addressed to the woman and to us. Among other things the oracle of Isaiah admonishes us not to remember former things nor consider the things of old but to behold the NEW THING God is doing in our lives which is happening already. Note that there are FORMER THINGS but there is a NEW THING. Here, the New Thing is salvation which is occasioned by God’s love for us (John 3:16). Ultimately the call of the season is for us to DISCHARG THE FORMER THINGS AND EMBRACING THE NEW THING. “Go and do not sin again!”

No doubt our Lord Jesus Christ remains the turning point of the narrative. His presence changed a condemned and soon-to-be-stoned woman to a redeemed and saved woman. Jesus Christ did not condemn the woman though he did not compromise the sin in anyway. He made provision for a second chance for the woman. God is not interested in the death of a sinner but in his (her) repentance and reconciliation with him (Ezekiel 18:23). Jesus is focused on saving the lost (Luke 19:10). Whenever we are living in sin we are lost like the prodigal son of last Sunday. God looks forward to our return like the loving father of the prodigal son. He does not wait to condemn us and stone us but to forgive us and to grant us another chance to become better.

Do not reproduce the acts of the Pharisees and the Scribes in their rash and senseless judgment.

Situate yourself in the position of the woman caught in the act. Remember God often catches you in the very act of sin.

Have a blissful Sunday and a wonderful week ahead! 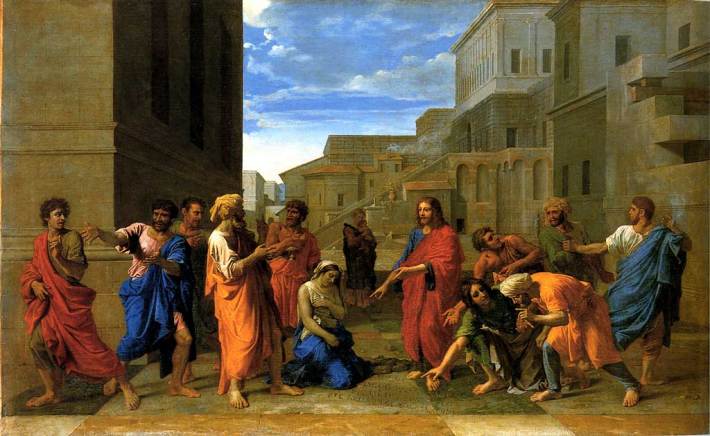 One Comment on “CAUGHT IN THE VERY ACT BUT NOT CUT OUT: HOMILY FOR THE 5TH SUNDAY OF LENT (YEAR C). Rev. Fr. Boniface Nkem Anusiem PhD”